“Africa has a long history of social and political exclusion, most notably in the form of colonial rule, which marginalized entire African populations. Unfortunately, however, this exclusion is not merely a thing of the past and continues to undermine the efforts of the African Union. The failure to incorporate elements of society (such as women) into the workforce has stunted the growth of the economy, making production inefficient and the market limited. Race, ethnicity and religion continue to cause conflict across the continent, and the diaspora is often excluded from “belonging”. Identity remains categorically segmented, certain groups remain consistently segregated, and the prospects of African unity and development seem to be creeping further from view.” 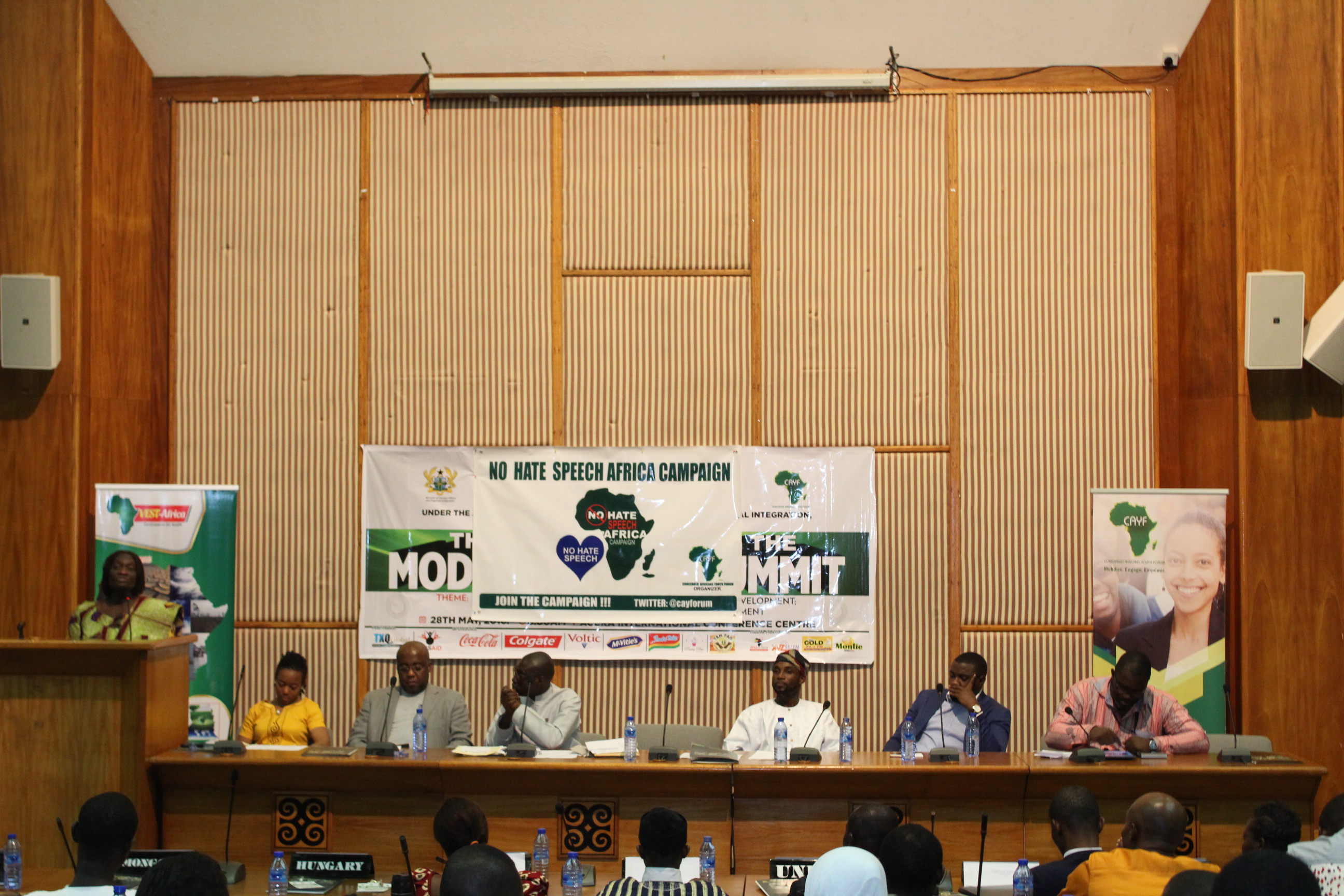 In a bid to keep at the front burner a peaceful and united Africa, the Concerned Africans Youth Forum (CAYF), a continental African youth leadership forum for young Africans concerned about the development challenges facing the African continent, on the 28th of March 2016 unveiled its mission focused at making Africa free of hate speech.


The launch which was held at the Accra International Conference Centre – was a side event of the annual Model ECOWAS Summit, a gathering of over 300 young people from all over Africa, in commemoration of the ECOWAS day under the auspices of the Ministry of Foreign Affairs and Regional Integration.

In his speech, the UN Peace Ambassador and Executive Director of CAYF Michael Opeyemi Ige cited hate speech as a major contributing factor to the state of war torn countries in many African countries. This, he said, has inadvertently earned Africa a seat in the league of under-developed continents in the world.

What… is Hate Speech?

Hate speech is a verbal attack on an individual or group; it is the advocacy of hatred based on nationality, race, religion and political affiliations.

While hate speech can often be dismissed as narrow-minded ranting or merely painful words, from our case in question, we need to awaken to the cold fact that it serves as an important warning sign for the possibility of a much more severe consequence: mass violence.

In the face of imminent political activities, tensions are slowly building and quietly, if left unmonitored, free speech could turn to hate speech which can easily become dangerous speech.  A surge in hate speech across the country as political tensions slowly build could quickly bring an end to the peace and political stability we have enjoyed for so long if left unchecked.

It is for this reason, that we at Concerned Africans Youth Forum (CAYF) decided to launch the ‘No Hate Speech Africa Campaign’ in recognition of the need to develop and intensify a wide range of effort that reaches beyond speechmaking.

Also speaking in the campaign, the Chief Executive Officer of Africa Women Development Fund, Ms. Theo Sowa commends the convener of the project for his foresight. She stressed that Africa need to redeem its image through peaceful co-existence; this, she said that as Africans there’s so much more that keep us together than that which keep us apart .

She urged the media to be circumspect in their report, even as Ghana elections draw near.

Zanetor Rawlings, aspiring Member for Parliament for Korle Klottey constituency challenged the youth to see themselves as leaders of today. She urged the youth to understand the power of tongue, citing the biblical story of creation “it is important to know that our spoken words can either create peace or chaos, so therefore, let use our words to heal, create peace and influence our world towards the path of nation building, she submitted.

John Dumelo, Ghana Ambassador of Tourism also joined his voice to ‘No Hate Speech Africa Campaign.’ He cited that ‘Words have power and could be your power, use them wisely.’ Sharing his experience he said: “I was attacked on social media and threatened; my mother was not left out as she called me and narrate how many people insulted her.

“But I decided not to react; rather i allowed my attackers remain frustrated by my silence. I also urged her to have a dead goat syndrome”.

The objectives of this campaign

1) To raise awareness about hate speech in the society and the risks it poses to democracy and political stability.

2) To reduce the levels of acceptance of  hate speech in the society.

3) To map hate speech online and offline and develop tools to combat it.

Mr. Michael Opeyemi Ige in his speech cited that this initiative will appoint Ambassadors, Country representatives and Campus Coordinators, as part of its campaign strategies.

Africans must be responsible for Africa. Every African is a stakeholder in creating and sustaining peace across the continent; it is, on this belief.. that Concerned Africans Youth Forum calls on continent-wide responsibility by signing on to the ‘No Hate Speech Africa Campaign’.

As my eyes span across this room, my heart gladdens to see you here – Africans from all walks of life who believe that you can create change.

On this note, we would like to formally invite all seated here today to open the floor in engaging and encouraging discussion on the distinction between free speech and hate speech by beginning a conversation.

We would like to commend the work of the National Media Commission and the Media Foundation for West Africa in the close and continous monitoring of over 70 radio stations in Ghana for hate speech, as we draw near to Ghana’s election, we call for joint action and stand against Hate speech in political campaigns and on social media.

In conclusion,  Hate Speech is not free speech. Free speech is responsible speech.

Twenty two years ago, our continent watched helplessly as hate speech inflicted wounds in a country that is still yet to fully recover.

Twenty two years after, we have been given a second chance. Join me say No to Hate Speech. Join the No Hate Speech Africa Campaign. Lend your voice to stop the Hate.